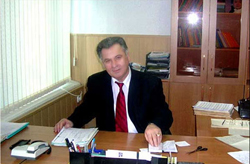 Khusyn Azamat-Gerievich Gotov — Renowned Circassian professional singer-educator and statesman, holds the following titles: Honored Artist of Kabardino-Balkaria Republic, People’s artist of Karachay-Cherkessia Republic, Honored Artist of Russian Federation, People’s Artist of the Russian Federation.
Khusyn Gotov was born on the 27th of February, 1941 in Jaco village of Karachay-Cherkessian Republic. After graduating from the Saratov State Conservatory in 1972 he continued his professional performance and creative activities as well as his education
From 1972 to 1974 he was director of the Habez Music School, where he prepared a group of talented young men who won acclaim as they performed across many regions of Russia. During his tenure as director, in 1973, the Habez Music School took part in an international folklore festival called Mountain Land in the Polish People’s Republic, where Khusyn performed Circassian folk songs.
From 1974 to 1981 Khusyn Gotov worked as a vocal teacher for the Kamyshin Music School in the Volgograd region, while enjoying a rigorous concert schedule there.
In 1981, Khusyn Gotov returned to their homeland. From the early days, he started to work as a singing teacher in Cherkessk School Culture and the Arts.

Khusyn Gotov has been blessed by nature with a wide range and beautiful timbre of voice, and is the first Circassian professional singer. Performing with vivid charm and personality, he has given new life to many songs and poems by local writers and poets. He sings in all of the many languages of the North Caucasus, which is always cause for pride, and promotes a sense of friendship and mutual understanding in his audience. People know and love him, both in Karachay-Cherkessian Republic and far beyond. He is an honorary doctor of Karachay-Cherkessia State University and was awarded the Voice of the Motherland Academy public recognition Kislovodsk Institute of Economics and Law. Since 2003, Khusyn has been the Director of the Karachay-Cherkessia State College of Culture and the Arts. He is a vocal advocate of Soviet-Russian and foreign classics. He continues to make valuable contributions to the development of culture in our country by his activity as a performer, teacher, and as the director of the College of Culture and the Arts. With a great concert of compositions by Russian, Soviet and foreign composers, as well as composers of the North Caucasus, it actively promotes concerts. He has traveled with concerts in Adygea and Abkhazia, Kabardino-Balkaria, has appeared on many concert stages of Russia, Belgium, Holland, Spain, Poland, Turkey and Israel.